I recently bought a battery pack to be able to use some of my music gear outside or when travelling. A couple of days ago we had a lovely autumn day here in Lyon, and as we didn’t have anything important planned we decided to spend it in a nearby park. A perfect opportunity for trying out the battery!

I brought the Eigenharp in its flight case and had packed the laptop, base station, battery and headphones already connected in the carrying bag that came with the instrument. So when we arrived and found a nice spot in the sun, all I had to do was connect the Tau to the instrument cable and then turn on the battery, and that was it. Why there isn’t an option in OS X to disable sleep when the lid is closed is beyond me, but I’m using “InsomniaX” to overcome this odd limitation. So I kept the MacBook Air closed and tucked away in the bag.

So, sitting on a bench in idyllic surroundings, I could practice my electronic instrument while watching people and animals enjoying park life. It felt great! I had wanted to do this just as a fun experiment and had even brought a book for when I got bored playing. But the experience was so immersive and satisfying that when it was time to head back home I had been playing for four hours straight. 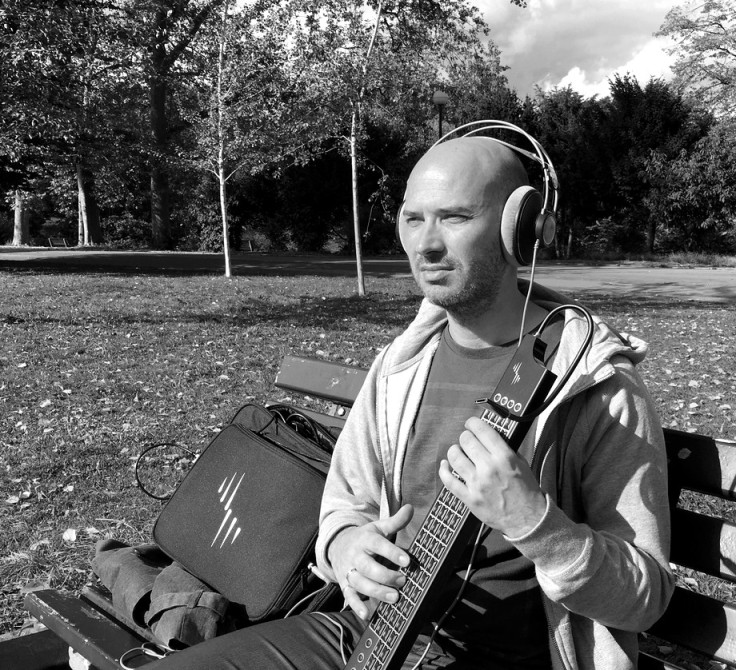 I’m not sure why playing in a park was so enjoyable to me. I mean, I always like doing music. But normally I don’t have the patience to just sit and play an instrument for hours on end. Perhaps it was the green, tranquil environment. Or perhaps watching the activities of everyone else in the park kept my brain just the right amount of occupied while my fingers were practising the same set of movements again and again. Probably a combination of many factors at once. In any case the end result was that I completely “zoned out” and just sat there feeling happy and content. I can’t wait to do it again!

As for the technical stuff, the battery pack is an “Xtorm AL390” I got from Amazon. In addition to two outputs for USB power it also has a normal european 230V AC output. After four hours of playing the LEDs on it indicated that it had somewhere between 50% and 75% power left. The MacBook Air had 36% of battery left, which was more than I had expected. Apparently battery life gets extended quite a bit when the lid is closed since the screen is off.

The only thing I can think of I’d like to change before my next outdoor practice session is that while the Eigenharp flight case is nice for keeping the instrument safe, it is unnecessarily large and heavy for just carrying it around. It started to feel heavy after a while. So the plan now is to ask around in Lyon for someone that can help me make a lightweight carrying bag in canvas or cloth with a shoulder strap.

Back to main page